I know what the bible says about same-sex relationships… let’s go ahead and establish that now. This entry is not to focus on that. It is simply to focus on the fact that LOVE IS LOVE. I support same-sex relationships and especially same-sex marriage. No matter what form it shows itself in. A few weeks ago, I met a woman I’ve grown to adore. Because of her, I’ve also had the pleasure of meeting a variety of different couples in the NYC LGBT community. The photo found at bottom of this entry comes from Jazzy and Ashley of The Bronx. I had the pleasure of meeting this amazing couple who is raising their son happily in love. I find it so beautiful that their love is strong enough to build the foundation of a family on.

I believe the Lord directs our path. Even when we aren’t going all the way in the right direction; God knows and sees all. Even before we do it, He knows. I’m not saying He accepts it, but one thing I do know is that as unpleasing as homosexuality may be in the eyes of God, it is no more displeasing than any other sin out there. The bible tells us not to drink to get drunk, as only a fool does that… but day to day our generation is getting ‘chocolate wasted‘. When I was commuting to my new mate’s place, I encountered the most IGNORANT man ever! We had a very upsetting conversation about “how a woman can never do what a man can”, “how I haven’t experienced a ‘real’ man”, and more appalling… “how he’s the man I need.” TUH! PLEASE! On top of all that ignorance he continued to exclaim how fine I was and “what things he could do with me and my lady” to change our ways–everyone does know that lust is a sin too, right? That brings me to my point of topic… WHY do men find two women in a relationship a “phase”, temporary, and better yet ACCEPTING, but can’t find the same point of conclusion with two men?

Now granted, lesbianism is becoming a ‘trend’ in today’s generation because it’s attractive to the male. Take the two women dating on this season’s Love & Hip-Hop New York on VH1. I may be wrong, but the relationship definitely looks like it’s for show to me. I am offended that it’s now being used as bait to attract men. I feel that is why most men don’t take a girl + girl relationship seriously or even have enough respect to simply walk away once you respond by saying you’re in a relationship with a woman. It seems like they perceive it as an open invitation to get both you and your mate in bed! Pigs!

You never know someone’s reasons for loving who they love, how they love them. Throughout my middle school years I was sexually abused–molested. That kind of long-lasting emotional battery can change a lot about someone to include who they choose to love, trust, and open up to. Don’t believe me? Ask me about it. Who are we as humans to judge that decision? Although it is said that this lifestyle is not pleasing in God’s eyes, let us also remember that the judging is for GOD to do. Not man. Be happy that those people love themselves enough to be honest with themselves and the world about who they were created to be. I commend every person that did not allow society to look down on you because your heart is bigger than their heart is. You are the people we need to balance out the world. Those people who love because their heart’s are compatible, not their genital areas.

Bless every same-sex couple, marriage, and supporter in the world. United we stand. 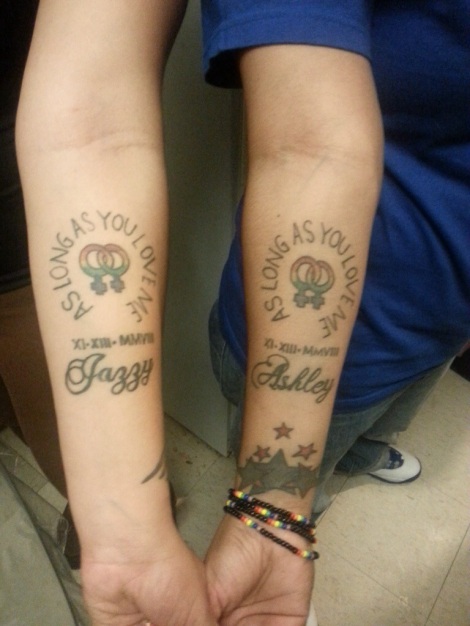